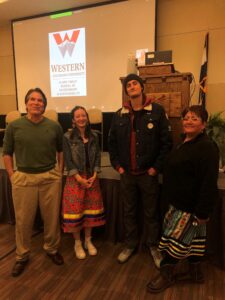 The 33rd Annual Headwaters Conference was held December 5-6 at Western Colorado University. The theme of this year’s conference was “Land Back: Indigenous Homecoming in the Headwaters”.

The event brought together indigenous community leaders, representatives from environmental and conservation organizations and university faculty and students for collaboration and discussion.

“‘Land’ is a bigger word than we think when we first hear that phrase,” said John Hausdoerffer, Headwaters director and dean of the Clarke School of Environment and Sustainability. “We came together to talk about land as medicine, land as kin, land as livelihood, land as living thing. And the word ‘back’ means a lot more than we think when we first see it: Indigenous peoples back, the security of cultural integrity and dynamism back, a sense of home here in the land of Westerns, back.”

The conference began Monday night with a keynote address from Melissa Nelson, Professor of Indigenous Sustainability at Arizona State University and a member of the Turtle Mountain Band of the Chippewa Indians. Nelson discussed the history of the displacement of tribal peoples and current efforts – and successes – to reclaim their ancestral lands. Nelson emphasized the diverse approaches and complex challenges of the Land Back movement and offered resources for non-Indigenous allies to educate themselves.

Tuesday’s program began with a presentation on Native American history in the area by Rick Waters, Kiowa/Cherokee Elder and CEO of the Denver Indian Center, and Richard Williams, Oglala Lakota/Northern Cheyenne Elder and former CEO of the American Indian College Fund.

Next, Regina Lopez-Whiteskunk of the Ute Mountain Ute Tribe of Towaoc and Montezuma Land Conservancy discussed cross-cultural partnerships between Indigenous nations and federal agencies, land trusts, and other organizations.

The theme of collaboration continued with afternoon workshops that challenged faculty, students and community members to begin the process of creating a land recognition for the university. A land recognition is a declaration honoring the indigenous people who were the original stewards of a particular area and is a centuries-old cultural practice for many indigenous people.

CMarie Fuhrman, director of Western’s Master of Fine Arts in Poetry program and associate editor of the anthology Native Voices: Indigenous Poetry, Craft, and Conversations, concluded the conversation by reading her land appreciation.

“A poem that recognizes that the land itself – along with the people whose language, culture and religion grew out of it – is rarely acknowledged,” she said.

The conference concluded on Saturday night with a screening of skier and documentary filmmaker Connor Ryan’s “Spirit of the Peaks” at the University Center, hosted by Ryan himself. The film explores the path of combining his passion for skiing with his indigenous roots and a deep respect for the land.

“These rooms have an intelligence,” he said. “When the Ute, Cheyenne, and Arapahoe peoples passed through [the mountains], the avalanche danger for them was no less. But they knew how to move through the landscape. Skiing can take us back to that space – deep respect for a landscape that can take our lives but at the same time inspires us to live and do incredible things.”

Looking ahead to this year’s event, Hausdoerffer emphasized the need for continued engagement from the university and the Gunnison community.

“Western has a responsibility to slowly and patiently build a partnership with the descendants of the indigenous peoples of the land where our campus is located,” he said. “We also have a responsibility to educate our students about the vibrant and enduring and diverse indigenous cultures that make up the region where we all teach and learn. It was so moving to see students, teachers and community members bend and twist together, exploring new and old meanings of land and back.”

(Anita Mumm is a student at Western Colorado University.)