The holiday tournament season is over! We moved our recap one day to make room for the Southern Scuffle Finals, which falls on a Monday. Hey, if the Rose Bowl can be pushed back a day, why not this one, the grandfather of wrestling blogs?

The summary of the last week

So this week we’re going to focus on the Midlands, the Soldier Salute, and the Southern Scuffle.

The dual of the century, of the week

There were no duals last week, so there is no century dual of the week. Want to refill that Pepsi?

Wildcats are going wild as they host the 58th Midlands

Not only did the Wildcats of Northwestern do their hosting duties well, they won the whole damn thing. This was, if you can believe it, the first team win for the Wildcats in program history.

This is the first of the Wildcats @MidlandsChamps Title in program history. pic.twitter.com/WIR0BkQdLv

The Art Kraft Men’s Champion of Champions Award goes to Yahya Thomas of @NUWrestlewho took home the 🥇 at 149 pounds.#Midlands58 pic.twitter.com/T5PzYEukQ1

Northwestern also had champions at 157 and 285 in Trevor Chumbley and Lucas Davison.

Find all the surprises from the Midlands here.

The very first Soldier Salute took place at the Xtreme Arena in Coralville, Iowa, literally a stone’s throw from the University of Iowa campus. This was the same arena that hosted the 2022 World Team Trials Challenge Tournament and the 2022 UWW Men’s & Women’s Freestyle World Cup, among others.

The Hawks dominated with 8 champions and 10 other runners-up. It’s hard to do much better!

Have a great weekend in Coralville!

Spencer Lee notably won one title, his first collegiate tournament championship since the 2021 NCAAs. Lee worked his way to a 125-pound title, winning via two pinfalls, a tech and a major.

Hear from Lee himself after his triumphant return to the mat. Wyoming’s Jacob Wright and Army West Point’s Ben Pasiuk were the only non-Hawkeyes to win titles at Coralville.

We have in the New Year at the ‘Noog

On paper, Missouri and Oklahoma State were expected to be in a dogfight for the team title. And they were. But then along came North Dakota’s Thundering Herd, determined to have a say in how it all played out.

The Bison came to Chatanooga to shake things up, and they did, especially in the 197-pound swirling Cauldron of Chaos, where Owen Pentz added to the leaderboard cacophony with a pinfall over #2 Ethan Laird of Rider.

The Tigers were also hampered by injuries that kept three of the tournament’s best pressings off the mat. You can hear more from Tiger head coach Brian Smith on the subject here: In the end, Oklahoma State brought too much firepower into McKenzie Arena, and they walked away with the team title. The Cowboys crowned three champions in Daton Fix, Dustin Plott and Travis Wittlake with 133, 174 and 184. They also collected nine other finishers, including four third-place finishers and one runner-up.

North Dakota State took an impressive second place with three of their own champions. Kellyn March and Jared Franek both won the final against higher-ranked opponents and in the 197lb final Owen Pentz followed up his big win over Laird with an injury win over Binghamton’s Lou DePrez, who we hope will recover quickly.

All the surprises of the Southern Scuffle can be found here.

Finally, no brawl would be complete with a harmonica solo from Mr. John F. Lennon, the number one Scufflonian himself.

Southern Scuffle in House Speaker @JohnFLennon1 is legendary, rocked his harmonica in front of the quarter.#LetsScuffle pic.twitter.com/D3dKQcisKT

It has been suggested to me that this summary should concern more conferences each week than has been the case so far, and I am only willing to respond to your requests. I will continue to kindly ask, no, implore you to reach out to me and let me know is there anything I can do to improve your reading experience?

We’ve covered this conference quite extensively, with the headlines being the titles of Iowa and Northwestern’s respective tournament teams. Also winning titles in Midlands were Eric Barnett of Wisconsin with 125, and Edmond Ruth and Zac Braunagel of Illinois with 174 and 197.

However, if you’re interested in learning more about the Wolverines of Michigan, could I suggest our latest issue of Wolverine Insider? Or are you perhaps a Cornhusker fan? Well, good news, we’ve got you covered there too!

Some of the best Big 12 action happened in Eastern Tennessee’s Southern Scuffle. The top three finishers were all Big-12 teams, with Oklahoma State taking first place, followed by North Dakota State and Missouri.

14 of the 20 finalists were Big 12 wrestlers, with NDSU having five finalists and Missouri and Oklahoma State four each. Northern Colorado had the tournament’s highest-ranked wrestler in #1 Andrew Alirez at 141, who will maintain that rank thanks to his match win against Missouri’s #9 Allan Hart.

Iowa State rested several of its starters after putting in maximum efforts at the Collegiate Duals last week. Find out more about the state of the cyclones in our insider column here.

Pitt had a very successful Midlands tournament in which All-American Cole Matthews and Hofstra transfer Reece Heller captured titles with 141 and 184 respectively. The Panthers finished the team race with Keystoners UPenn in second place. Pitt amassed seven top-eight finishes, including a second-place finish for heavyweight Dayton Pitzer, who, like Heller, had a breakthrough in Hoffman Estates, Illinois.

Will head coach Keith Gavin ditch young Pitzer’s redshirt and add him to the lineup? We’ll know in a few months at the latest!

We also have insider articles on the Hokies and the Wolfpack for VT and NCSU fans to enjoy.

SIU-Edwardsville was the highest scoring MAC team in the Midlands. They had five top 8 finishes, with Caleb Tyus taking fourth place with 149 and veterans Saul Ervin and Colton McKiernan taking fifth place with 141 and 285, respectively.

Rider also performed admirably in the scuffle, with a trio of finishers including McKenzie Bell, who placed fourth with 141.

Arizona State finished sixth in a very competitive Midlands. The Sun Devils were eluded of a singles title, but they had runners-up Brandon Courtney, returning at 125, and Kyle Parco at 149. Cohlton Schultz took third place in the heavyweight division after losing to the aforementioned Pitzer in one of the bigger shockers of the week.

Stanford finished fourth in the Southern Scuffle, with a champion in Shane Griffith and eight other top-eight finishers, including Jaden Abas, who fought his way back to third after a first-round loss to Michael Gioffre of Virginia.

Little Rock also did well, finishing tenth as a team with three finishers including the 174-pound Triston Wills, who finished third.

Speaking of the Army, check out our behind-the-scenes tour of the Army’s historic West Point campus. Pay special attention to the breathtaking camera work in this professional video! 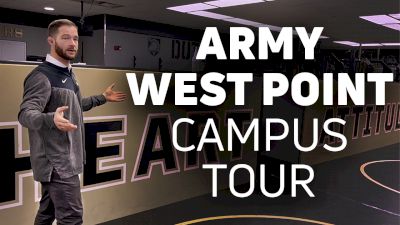 I also found this campus tour from 2011. Hard to believe it’s been 12 years, but I guess that’s how time works!

Other EIWA men who have had productive holiday breaks include Penn’s Michael Colaiocco and Princeton’s Quincy Monday, who won Midlands titles at 133 and 165 respectively. Monday is a returning NCAA runner-up who started the season at 165 for the All-Star Classic, dropped to 157 and now appears to be back at 165. We’ll see if the new, new weight class holds up.

Colaiocco defeated Chris Cannon, also a Blair Academy alum, now with Northwestern, in the 133lb final in the Midlands. Colaiocco has been a Quaker fixture since 2020 but was stripped of two NCAA tournament appearances. He earned the No. 9 finish with the NCAAs last season and went 2-1 at the tournament, losing his last two bouts of the season in a thrill.

Penn tied for second place with Pittsburgh while east and west of Keystone State showed up in Chicago.

And in the brawl, Binghamton placed seventh with two finalists, Lou DePrez at 197 and Cory Day at heavyweight.

UT-Chattanooga has hosted the Scuffle for many years. The Mocs had a finalist in Brayden Palmer at 133, beating Aaron Nagao and Ramazan Attasauov along the way. Chattanooga placed 16th as a team, several places behind SoCon rival App State, which placed 13th with three individual place finishers.

Recently there has been a lot of dismay about the composition of participants in the holiday tournaments this season. For example:

To this I would just add that while the arc of the moral universe may be bending towards justice, the arc of the wrestling community is bending towards discontent. Which is not to say that anyone who is dissatisfied with something about the sport is wrong or that they shouldn’t voice their opinions! This is the controversial nature of the sport! We are nerds. Complacency is the enemy of progress, and of course if we don’t make progress, we will spend much of our time not being satisfied.

But if I may, at least in the early days of the new year, I would like to take a slightly rosier look at the current situation and look back at how much better it is now than just 10 years ago. And if you didn’t follow wrestling closely 10 years ago, that’s even better; the cake is growing!

So join me in lifting a drink of your choice and toasting the new year and the incredible opportunities that await us all. It’s a great time to be a wrestling fan please believe it.

See you next week, wrestling friends!