It’s the exhilarating wonder of flying celebrated each year with the latest specialty gear and state-of-the-art amenities. For half a century, hot air balloon pilots have consistently pushed the limits of what their technology can’t do while wildly enjoying what they can at the Albuquerque Balloon Fiesta, a massive balloon festival in Albuquerque, New Mexico. 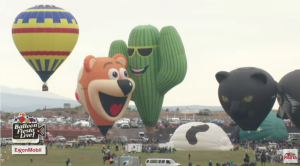 But while spectators delight viewers and provide their passengers with the experience of a lifetime, the event also showcases how a particular technology can evolve into a type of culture that fits seamlessly into everyday big-city life in America’s 32nd most populous city. 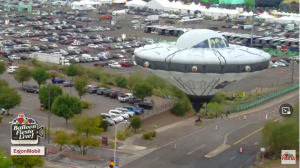 As participants gracefully celebrate the art of ballooning, they also show how it gradually morphs into something more – something magical, meaningful, and yet always just as unpredictable as the technology itself.

Albuquerque’s Balloon Fiesta was established in 1972 and is now the largest balloon festival in the world. More than 600 hot air balloon pilots are invited to bring their balloons to an annual ‘convention’ of sorts, and each morning of the nine-day festival they take to the skies simultaneously. 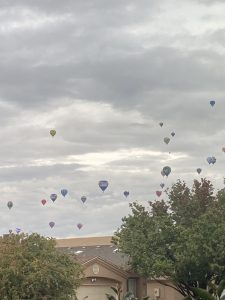 The flights exert an irresistible attraction that fascinates people from all walks of life. Albuquerque native Colleen Perry describes herself as a “housewife and dog trainer” — but she’s also now leading the chase for one of the early “Dawn Patrol” balloons. They help inflate the balloons – but then follow their trajectory so they can help land, then dismantle them so they can be transported back for a later launch.

In fact, a whopping 800,000 visitors were expected this year, a community of diverse adventurers and fun-lovers including at least one nomadic couple who had converted a bus into a dream home. They shared their own video on YouTube of the very first balloons being inflated (and lit up inside) to be flown by the Dawn Patrol before dawn.

But as the first balloons lit up the morning darkness, the couple also reflected on the essential challenge of ballooning: “The whole time, you don’t know where you’re going to land.”

At least a century before the Wright brothers made their first flight, mankind had been experimenting with using balloons to get airborne and filling the balloons with either hot air or lighter-than-air hydrogen. Technology has always had its limitations, and that’s a lesson that plays out in real time at the Balloon Fiesta each year. Balloonists can only choose when to ascend and when to descend – with all other movements being dictated by the wind directions above and below them. And with hundreds of balloons in the air every day, every pilot faces that essential unpredictability. On Thursday, local television station KOB captured footage of a balloon landing on a suburban street.

And it’s anything but an unusual occurrence. 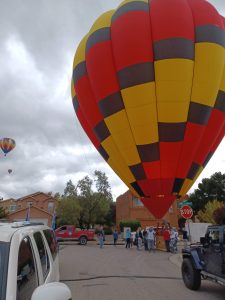 A surprise landing at the intersection of Carmel Avenue and Santa Clarita. Photo by David Kassel 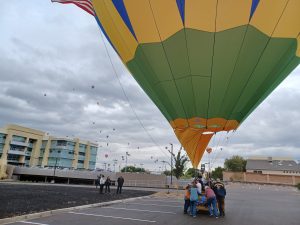 Thursday, October 6 – A balloon lands in the parking lot of a laser eye surgery clinic. Photo by David Kassel

Last year, WBUR pointed out that local landowners even spread colored sheets to invite balloon pilots to land (or tell them to land somewhere else). But they also found that in 2021, 1,200 homes lost power after two balloons accidentally crashed into power lines.

One morning that week, the couple on the converted bus discovered that the wind had blown a balloonist right into their parking lot. And they later interviewed another balloon pilot who knowingly joked, “It’s pretty easy to land when you’re out of fuel,” while recalling another balloon that actually landed in a supermarket parking lot.

On the plus side, he stressed, “I haven’t missed the bottom yet.”

Other pitfalls also await. A crew successfully packed up their balloon in a public park – only to find that the heavy equipment had buried their truck in the park’s soft grass. 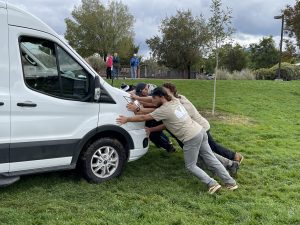 As one balloon company cautiously puts it, “Ultimately, balloons travel with the wind and don’t always land where we’ve landed in the past.” But they assure potential customers that “New Mexicans love hot air balloons and so do most residents and property owners.” glad we’re landing the balloon nearby.”

“One of the fun things about the actual chase is you never know where the balloon will land or how long it will fly,” Perry writes on a blog called Albuquerque Mom.

In fact, unpredictability has become part of the local culture. “One of the best parts of landing in a residential area is getting the people involved,” adds Perry. “As long as conditions are right, the chasing crew will often ask spectators to help bring the balloon down. We also try to let the kids in the basket for a minute before deflating if we can.”

Spectators sometimes even partake in a long-standing tradition: balloon pilots always carry a bottle of champagne with them. Legend has it that the first balloons were mistaken for fire-breathing dragons or demons from another world – and French balloonists brought champagne to prove they were the usual fun-loving French.

To this day, it’s useful for calming angry landowners when you’ve made a surprise touchdown on their property. A chase crew spoke admiringly of their pilot, who had shared champagne as they landed in a commercial stand of trees.

“When a balloon lands in your yard, the pilot shares champagne with you as a gesture of gratitude and goodwill,” Perry writes.

Perry adds, “We usually have cheese and crackers with it, too.”

Thrills of the Chase crew

Over the past half century, the festival has gradually appropriated and adopted the latest technologies. A “tracking crew” on the ground told me they also use a web-based flight tracker for the balloon they’re servicing, which instantly translates its GPS coordinates into a handy visualized flight path tracking map. Air-to-ground radios are now being complemented by GPS tracking systems and even backup cell phones for communicating with ground crews. And, of course, balloonists also use altimeters to measure altitude.

And there’s also an official Balloon Fiesta app that now delivers news and schedule updates for both Android and iPhones.

But modern technologies continue to find their way into the event’s graceful celebrations. One of the parks is even sponsored and named after Intel, with the chip manufacturer also flying its own balloon at the festival.

The local police department will even put electronic tags on children so they can wander around the event and still be located by their parents. In an interview on the festival’s official livestream, a local police officer said the department tagged “between 500 and 700 children”.

And when the event started on October 1st, the first event was a drone light show.

But technology can only achieve so much, and the past half-century has also brought celebration to a world grappling with climate change — and the difficult weather conditions that come with it.

“The only place in the entire United States that it rained was in New Mexico,” balloonist Scott Appleman grumbled to a local news station. (Or at least the only state where excessive rain could potentially lead to flooding.)

Brad Temeyer, a balloon festival forecaster, told the station that Florida’s Hurricane Ian pinned a low-pressure weather block over the Rocky Mountains. “It just couldn’t move because this hurricane was over the east coast. This negative pressure lasted throughout the weekend and led to bad weather showers and thunderstorms.” Low clouds also restricted visibility – a dangerous situation for this year’s balloon pilots.

The signature “mass ascent” event – in which a crowd of the event’s hundreds of balloons rise into the sky in the morning – was canceled twice during the week due to rain. Also canceled was Thursday night’s Glowdeo – a spectacle where air-heating burners are adjusted to light up the entire balloon and create a pageant of glowing canvas. 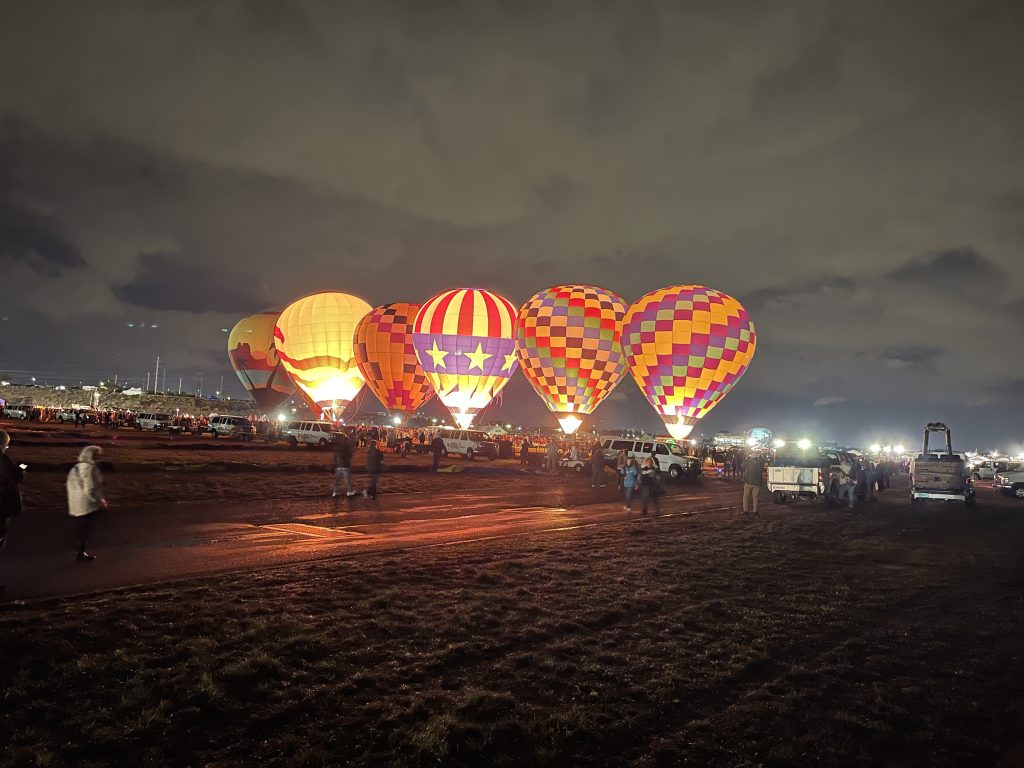 But perhaps the biggest disappointment was the cancellation of the spectacular long-distance gas-powered balloon race, which, according to festival websites, disappointed eight different teams from five countries, including the father-son team from Germany who currently hold the world record. (Previous attendees had flown all the way from Albuquerque to Canada or even the East Coast of the United States, the festival’s website adds.)

The event organizers had prepared a live satellite tracking of all balloon positions and prepared to stream everything via the festival website and the festival’s official phone app for Android and iPhone. But in the end, “weather conditions made it impossible to hold a safe, competitive race,” explains the Fiesta’s official website.

But even as the event enters the second half of the century, the spirit of balloonists remains undaunted. Dana Seymour tells me that her pilot is one of the many who also caps all of their flights with the balloonist’s prayer.

“May the winds gently welcome you.
May the sun bless you with its warm hands.
May you fly so high and so good that God laughs with you
And gently brings you back into the loving arms of Mother Earth.”

Over lunch at a hamburger joint in Albuquerque, Seymour put it even more succinctly.

“The one thing we kept finding at the Albuquerque Balloon Fiesta was joy.” 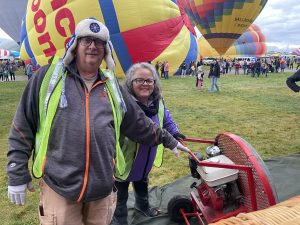 Members of the Colorado 2 “Chase Crew” – husband and wife Dana and Julie Seymour.