A *FREEZE WARNING* is in effect tonight from 10pm to 8am for Ascension, Assumption, East Baton Rouge, Iberville, Livingston, Pointe Coupee, St James, St Mary Parish, Southern Tangipahoa and West Baton Rouge Parishes. Temperatures of 28 to 32 degrees are expected to kill crops and other sensitive plants. A *HARD FREEZE WARNING* is in effect for the communities of East Feliciana, Northern Tangipahoa, St. Helena and West Feliciana, as well as Amite, Pike and Wilkinson counties. Temperatures as low as 25 degrees can also potentially damage outdoor installations. Remember to take the right precautions and ensure people, pets and plants have access to heat.

Next 24 hours: Tonight, clear skies and light winds will allow thermometers to reach maximum cooling potential, bringing it to freezing in many areas, particularly north of I-10. Locations north of Baton Rouge might spend a few hours in the upper 20s. This would mark the first freeze of the cool season for the city. Sunshine will continue on Friday, allowing afternoon readings to rise about 25 degrees into the upper 50s. The wind remains light and comes from the northeast. 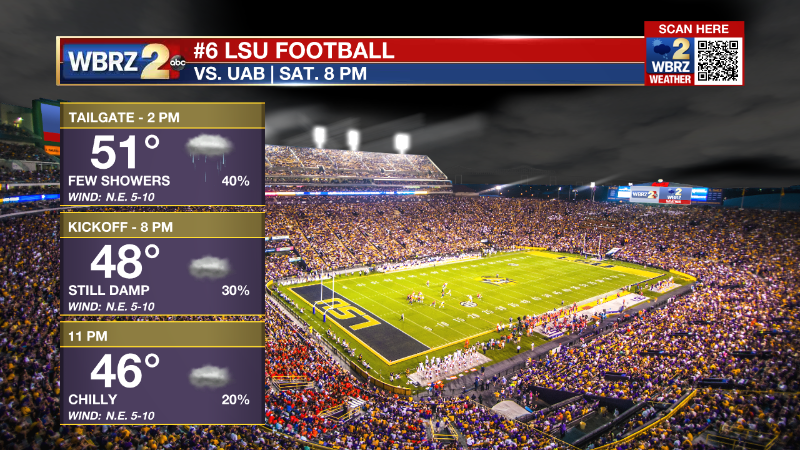 Next: A light storm system will pass through our area to the south on Saturday but could hurl some showers as far north as I-12. This activity will be much easier than earlier in the week. Nevertheless, a wet, cloudy and cool start to the weekend is expected. Expect occasional, light rain showers when driving to campus for a drive-up or game. Temperatures will fluctuate around 50 degrees. A strengthening front and northerly winds behind mean temperatures will remain below average on Sunday and Monday with highs in the 50s and lows in the 30s. Temperatures will soften somewhat towards Thanksgiving, but a frontal system will also bring some holiday showers. CLICK HERE for your detailed 7 day forecast.

The tropics: All is calm for the North Atlantic, the Caribbean Sea and the Gulf of Mexico. No tropical development is expected for the next five days.

The explanation: A dry layer will spread further into the atmosphere Thursday night through Friday, causing clouds to break up. Coupled with light northerly winds, conditions will be favorable for radiant cooling and low temperatures will allow for down to freezing in southwest Mississippi with temperatures in excess of 20 degrees. Mostly sunny skies push temperatures back into the mid-50s on Friday afternoon. In the climatologically favorable region off the southeast coast of Texas, a low will develop on Friday night. A warm front will form offshore and southwesterly high altitude winds skirting the basin of a broad upper level trough that still exists over the eastern US will result in the formation of a precipitation shield. Increased cloud and a few showers are possible up to I-12 to the north as this low sweeps east across the Gulf of Mexico on Saturday. Most of southwest Mississippi remains dry, a shower or two is possible near Metro Baton Rouge, and some showers are likely along the coast. After Saturday, the pattern becomes slightly less active. The wide trough will eventually weaken somewhat and that will allow for a warming trend as a surface high pressure system advances into the eastern US and onshore currents begin next week. The thermometers could be closer to average by Thanksgiving when the next rainmaker hits the region.

The Storm Station is there for you on every platform. You can find your weather updates on News 2, wbrz.com and the WBRZ WX app on your Apple or Android Device. Follow WBRZ Weather on Facebook and Twitter for even more weather updates on the go.