This blog shares the story and pictures of Warren and Betty Hearnes’ return to Mississippi County on January 8, 1973. 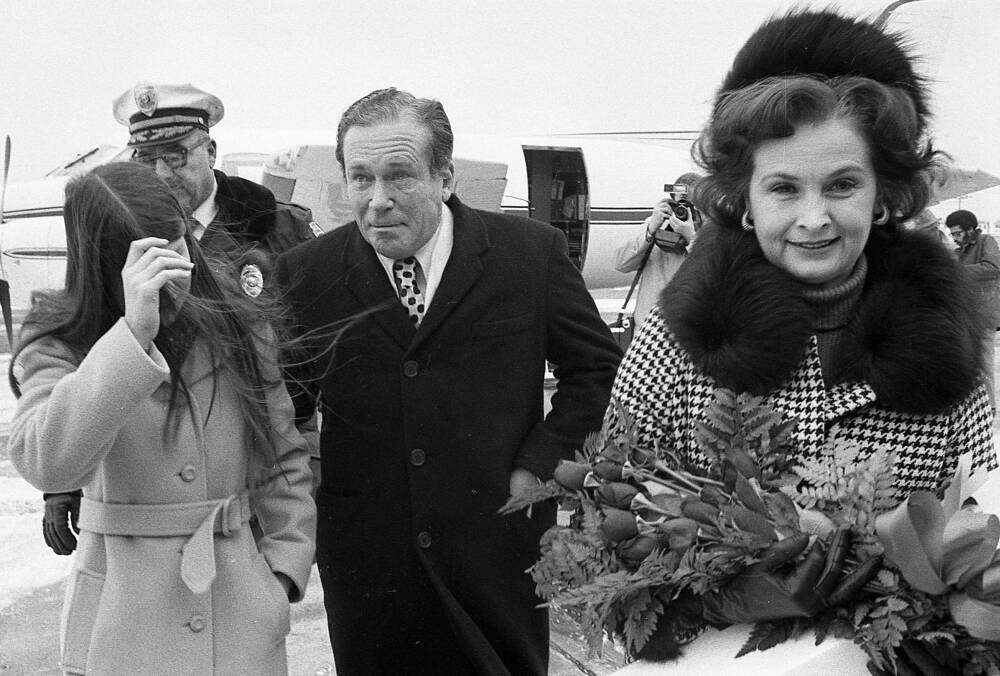 Warren E. Hearnes, who resigned as Missouri chief executive Monday, along with Betty Hearnes and his daughter Julie B., navigate toward a waiting crowd after landing at Sikeston Airport Monday afternoon on his return to southeast Missouri and Mississippi County. Escorting them to the left is Sikeston Police Chief Arthur Bruce. (Gordon McBride ~ Southeast Missouri Archives)

CHARLESTON – Many of the people who had gathered to await the return home of Warren E. Hearnes could recall eight years ago when a different crowd gathered for a Hearnes celebration.

At the time, there was good cause for celebration for the counts of Mississippi and Southeast Missouri, as Mr. Hearnes had just been elected Governor of Missouri.

Monday was also a time for celebration when Governor Hearnes resigned as Missouri’s 46th governor and returned to his home in Charleston to once again become Mr. Hearnes because, as one of the people who greeted him said, “Jefferson Citys Mississippi County’s loss is Mississippi County’s gain.”

The mood was festive and despite the temperature hovering in the 20s, large crowds came to greet the former governor as Mississippi County officially welcomed Mr. and Mrs. Hearnes home.

From the moment he arrived from Jefferson City and stepped off the plane in Sikeston to be greeted by two of his daughters, Lynne and Julie B., to the end of a dinner honored in his honor, Mr. Hearnes shook hands constantly and responded to greetings from city officials, civic and youth groups, and individuals.

Mr. and Mrs. Hearnes were delighted with the welcome they received from neighbors and friends on their return home.

“It’s good to live in Mississippi County and it’s good to be back here,” Mrs. Hearnes said.

“My years spent in Mississippi County and the friends I have here mean more to me than anything else in my life,” Mr. Hearnes told the crowd. He added that this is the first time, to his knowledge, that an outgoing Missouri governor has received such a welcome ceremony at his home.

Mr. Hearnes had spent most of the morning and early afternoon in Jefferson City to attend the inauguration ceremonies for his successor, Gov. Christopher S. “Kit” Bond, before arriving at Sikeston Airport around 3:15 a.m. Monday afternoon.

After being greeted by a large crowd led by Mayor Frank Ferrell of Sikeston, who declared January 8, 1973 as Warren E. Hearnes Day in Sikeston, Mr. and Mrs. Hearnes were presented with plaques declaring them honorary citizens of Sikeston.

Mr Hearnes said in the first of several responses to the salutes: “When I was elected governor, I said I would not be governor of Southeast Missouri but would try to represent all parts of the state. Everything I was trying to do was for the good of everyone in the state.” 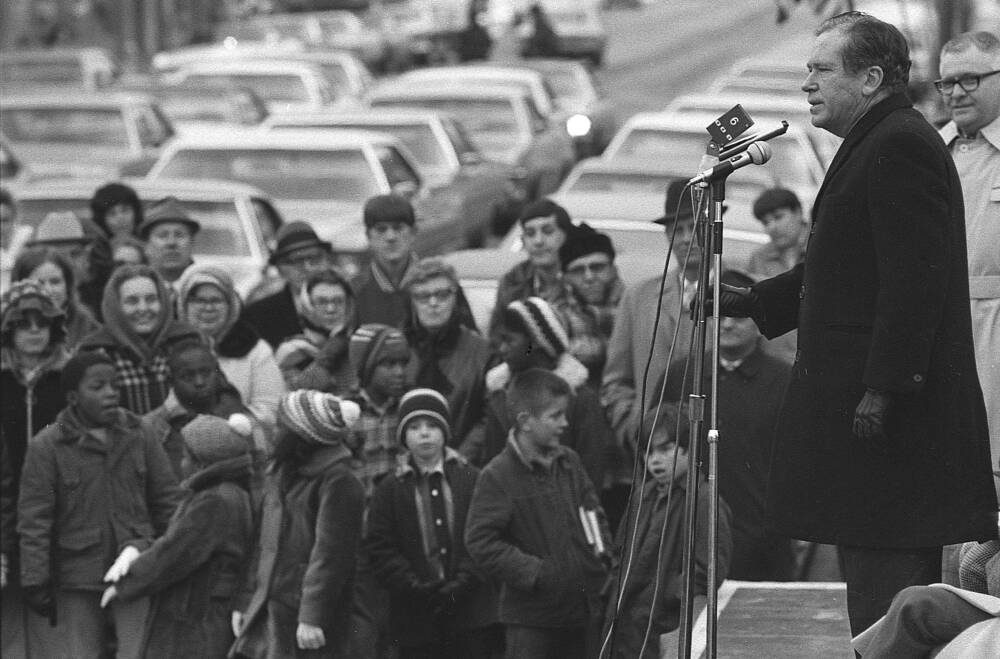 A merry crowd in Charleston listens to former Gov. Warren E. Hearnes, whose homecoming Monday after serving in various positions in Jefferson City over the past 22 years gave cause for celebration. (Gordon McBride ~ Southeast Missouri Archives)

The Hearnes were escorted by a motorcade back to Charleston, where another large crowd awaited the return of Mississippi County’s favorite son.

“Today we welcome Warren and Betty Hearnes as friends and neighbors,” said Sheriff WJ “Pedro” Simmons during the official welcome. “The name of Warren E. Hearnes will go down in history as one of the greatest governors in history. We are proud here in Mississippi County that he and his family represented us and Missouri.”

Jerry Williams, a member of the East Prairie R-2 Schools County Teachers Association, presented Mr. Hearnes with a plaque citing him for “his sustained interest in and contribution to public education.”

East Prairie High School Student Council President Jimmy Heath also presented Mr. Hearnes with a letter from the school system praising him for his many years of service to public education.

At a special service later that afternoon, Rev. Robert Burke cited Mr. Hearnes’ efforts as governor of education and mental health facilities and his strong commitment.

He said that if history were written about Governor Warren E. Hearnes’ years, it would say, “The windows opened and a breath of fresh air blew through the state administration.”

Over 400 people attended a dinner and dance at the Charleston National Guard Armory Monday night to welcome the Hearnes family home.

dr Bill W. Stacy, an assistant professor of language at Southeast Missouri State University and a brother-in-law of Mrs. Hearnes, served as master of ceremonies.

Other participants in the program were Dr. Lowell Nikolas, President of the Charleston Chamber of Commerce; Bob Delaney, Chairman of the Missouri Conservation Commission, and Mrs. Waggoner. 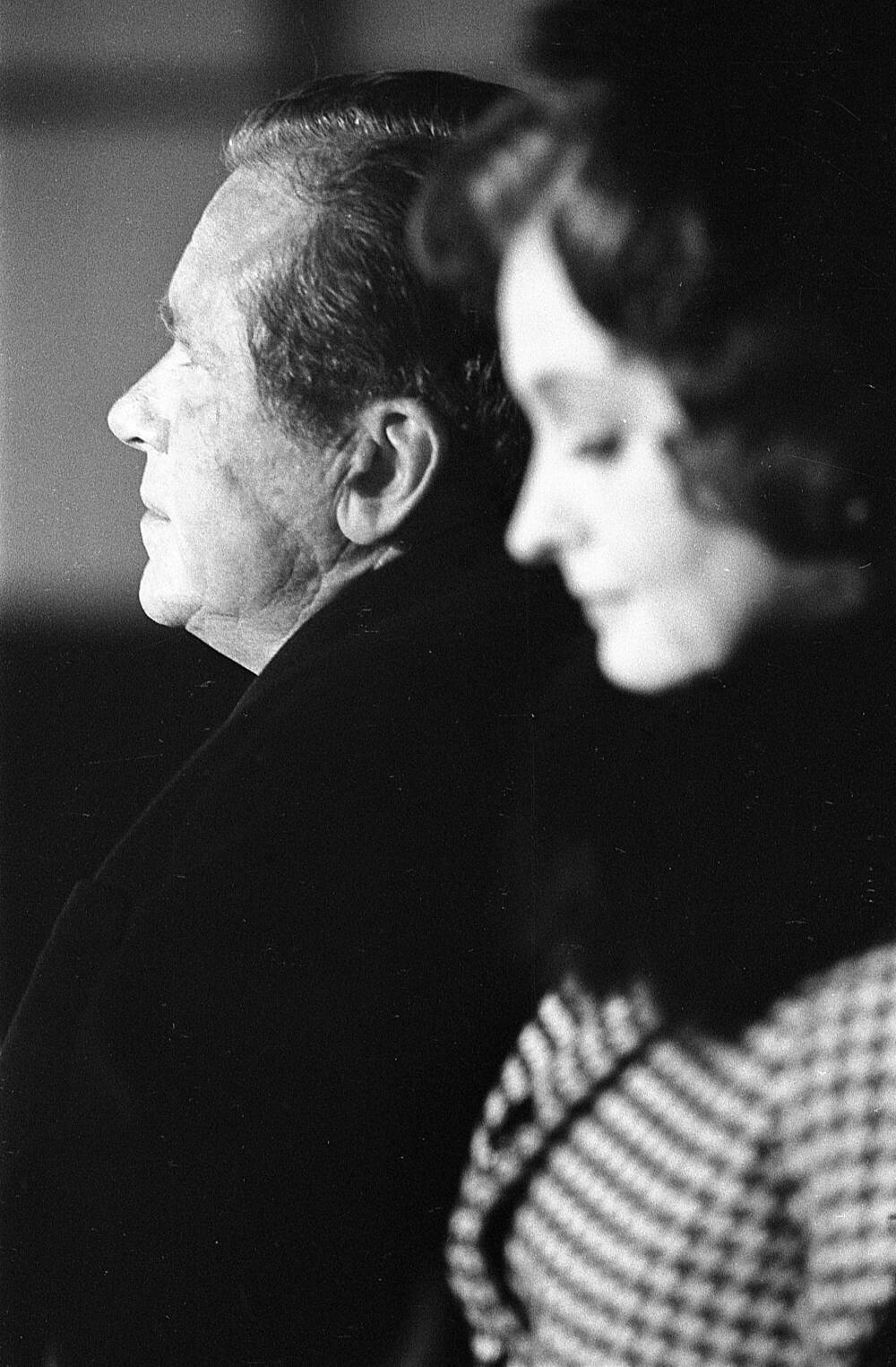 Mr. and Mrs. Hearnes reflect on the past eight years as Missouri’s first family while listening to another speaker deliver a welcome speech. The welcome ceremony, planned by the East Prairie and Charleston Chambers of Commerce and the Mississippi County Colonels, culminated with a dinner and dance on Monday night. (Gordon McBride ~ Southeast Missouri Archives)

Ms Hearnes told the dinner party: “It has been a privilege for us to serve as your first family. We’re grateful you gave us the privilege, and we hope you’re grateful we had it.” Upon returning to become a full-time citizen of Charleston, Mr. Hearnes said, “I firmly believe that You exist only for what you can do for someone else, you can do it by doing things for others.”

“Whatever projects you have in store for the county, count me among them. I’m ready to go,” he concluded.

The Southeast Missourian published an editorial that same day reviewing Warren Hearnes’ “22 years of service to the people of Missouri” and his “remarkable record of good government.” The editorial writer also praised Betty Hearnes, his “handsome, articulate companion.” 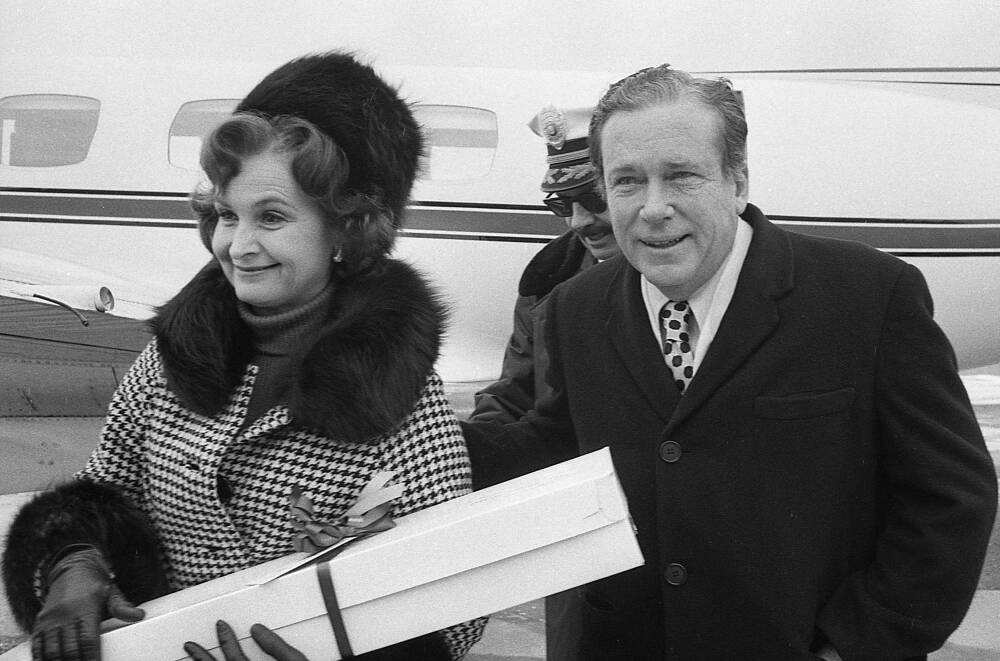 The former West Point cadet, who gave up a military career for a political life, left the Missouri governorship after two terms.

He handed over the affairs of state to Christopher S. Bond, the youngest man in office, and returned to his home in Charleston immediately after the inauguration.

Warren Hearnes spent 22 years of service to the people of Missouri and during that time amassed a remarkable record of good government.

He was an effective Mississippi County legislature, winning five elections. The respect he gained among his peers is shown by his election as Majority Leader of the House of Representatives for the 1957 and 1959 legislatures.

A tenure as State Secretary followed, and he filled another position with distinction.

Then followed two terms as governor of Missouri. This was unprecedented because he became the first full-time governor to succeed him. Previously, a governor could be re-elected, but not for consecutive terms.

It’s an unusual achievement. Mr. Hearnes won a string of eight consecutive elections, from his first House race in 1950 to his 1968 election to his second term as governor.

Probably no other governor in Missouri history has faced more complicated problems than Warren Hearnes. He took office in 1964 when the country was seething with social unrest. This continued through the remainder of his time as CEO.

It is a tribute to Mr. Hearnes that there has only been one major outbreak of violence during that time and that he acted swiftly with appropriate strength and determination to stop it. It was man’s measure that he knew when and how to act decisively.

He has cited his contributions to education and mental health as outstanding achievements among his accomplishments as governor. There is no question that he will be remembered for these achievements. Education was changing. He greatly improved education funding and oversaw restructuring at both the public school and university levels. Mental health facilities have gained a dignity and prestige previously denied to them.

Aside from these and a long list of other achievements as governor, Mr. Hearnes has others. He gained national standing among his fellow governors and brought Missouri recognition for his leadership and outspoken statements.

We also remember that he was not one to sit back and let the federal government dictate what the state would do. It will be recalled that on several occasions he defied federal agency when he felt their actions would harm Missouri and the people of that state. This earned him nationwide recognition.

His fellow politicians gave him a final accolade. Both Democrats and Republicans praised his achievements. “He was a good governor,” is the sentence that rings in his ears from his colleagues when he leaves office. Can a politician wish for more?

In our view, a large part of Mr. Hearnes’ success in public office — Legislature, Secretary of State, Governor — rests on his wife, Betty. She was an attractive, articulate companion who endured both a politician’s rebuke and praise, endured and helped while raising a beautiful family. Betty Hearnes has every right to share equally in her husband’s tributes.

It is also worth mentioning another person who has remained loyal to the outgoing governor throughout his political career. Mrs. Laurence B. (Cathryn) Adams was the governor’s secretary for most of his tenure, the last 18 years. She has worked with him and completed a variety of tasks with insight and attention to detail.

Mr. Hearnes has returned to law practice in Charleston and St. Louis. In July he will be 50 years old. He’s a young politician. His political skills are still needed by the people of Missouri. We trust that his current return to private life will not mean the end of his political career.