Representatives of Secure Democracy USA and other pro-electoral policy advocates recently testified before the Interim Judiciary Committee of the Kentucky General Assembly at the State Capitol Annex in Frankfurt on the vital issue of restoring voting rights.

Kentucky is currently one of only a handful of states that permanently disenfranchises people convicted of a crime. Today, 43 other states automatically restore voting rights after a person serves their sentence, including Arkansas, Missouri, Louisiana, South Dakota and Texas. 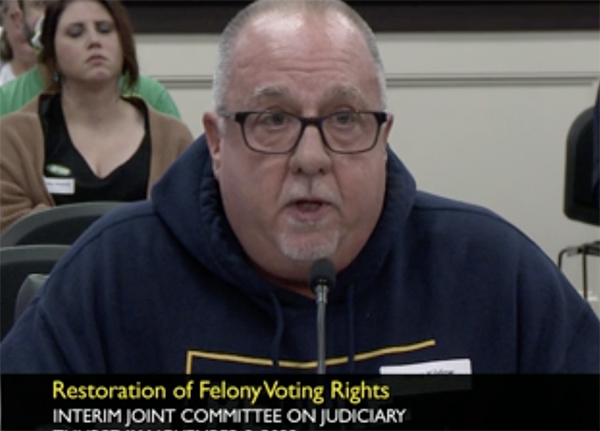 “I’m here to express our strong support for restoring voting rights and to urge you to move this important issue forward,” said Charley Olena, vice president of advocacy at Secure Democracy USA. “It is estimated that approximately 200,000 Kentuckians are currently disenfranchised as a result of a felony conviction. These are real citizens across the Commonwealth who have served their time and live, work, raise families and pay taxes in their communities – but they cannot vote or participate in our political process.”

Public Opinion Strategies pollster Robert Blizzard shared data from his company’s latest nationwide poll, confirming that a clear majority of Commonwealth voters support restoring voting rights to those who have served their sentences.

Highlights from this fall’s in-depth survey include:

• 70% of Republican primary voters Support the state legislature as they amend the constitution in an upcoming vote to find a lasting solution.

• 53% of Republican primary voters originally reported to support the change. After we received more information—specifically, the importance of giving Kentuckians who worked hard to earn one a second chance—support rose to 60%.

“Society needs an effective justice system to hold people accountable and protect us all from harm,” said Jason Hall, executive director of the Kentucky Catholic Conference. “However, once the conditions set by this system are met, the best way to serve the interest of society is for the person who committed the crime to once again accept and fulfill their responsibilities to the community. This includes working, paying taxes, fulfilling family responsibilities and participating in the political life of their community.”

Greg Kildow, General Manager of RAD Accessories in Marshall County, and Marcus Jackson, ACLU Organizational Coordinator in Kentucky, each shared their personal stories of being reintegrated into society after serving their sentences.

“Despite the positive steps I have taken to rebuild my life as a productive citizen of our Commonwealth and the success I have found in my career and personal life, I will not be eligible to vote,” Kildow said. “I am confident that the day will come when I can proudly register as a member of the Republican Party and vote in the elections on decisions that will affect my future – which continues to look very bright.”

“On November 8th, the Kentucky ACLU (as well as many workplaces statewide) will grant me time off to vote; but I can’t vote because of a 1992 conviction,” Jackson said. “The irony of disenfranchisement is that the very behavior society encourages — engagement with the larger social and political collective — is undermined by a law that denies the right to vote to people who wish to engage in this way.”

Senator Brandon Storm (R-London) plans to support legislation that would bring a constitutional amendment to restore voting rights to the ballot at the upcoming regular session of the Kentucky General Assembly in 2023.

Archived video of last week’s Interim Committee on Judiciary hearing can be viewed online at www.ket.org.

After the hearing, the League of Women Voters issued a statement in support of a constitutional amendment to restore voting rights:

“Kentucky remains just one of three states in the country that permanently bans its citizens from voting if they have been convicted of a crime. As a result, 152,727 Kentuckians are currently barred from voting. This is the seventh highest rate of disenfranchisement for all citizens and the eighth highest rate for African Americans among any state.

“Amending the Kentucky Constitution is the only means by which those convicted of a crime can automatically have their voting rights restored, which would provide a more permanent solution to this problem.

Fran Wagner, President of the LWVKY, commented, “While this hearing did not address any specific legislation, the League of Women Voters views this informational hearing as the beginning of a conversation between our legislators and voters that will ultimately result in the successful passage of one.” bill giving that decision to the people of Kentucky.”

“Access to the ballot box and the right to vote is a sacred principle of democracy that gives citizens a voice in the way they are governed. It establishes all other rights and empowers citizens to participate in government and not just become petitioners. It should not be withheld from those who are working to build a new, productive life.”