You don’t have to watch the Kansas men’s basketball season closely to see that KU coach Bill Self hasn’t relied too heavily on his bench so far this season.

But the numbers paint an even clearer picture.

According to KenPom.com, Kansas ranks 305th nationwide in bench minutes in the first 10 games of the season, with Selfs Reserve playing just 25.6% of the time.

That’s significantly less than the national average of 31.1%, and there are many reasons for that.

Only three players on KU’s bench are averaging double-digit minutes per game, and two of the three — Bobby Pettiford and MJ Rice — have missed multiple games. Junior guard Joe Yesufu is the only player on the KU bench who has played in every game this season. And even that was hit or miss. 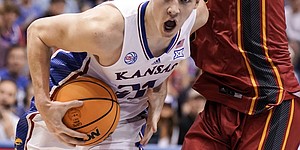 Although Yesufu’s commitment has increased recently – he’s played an average of 21 minutes per game over the past four games – he’s played single-digit minutes in five of the 10 games he’s appeared in. His season high of 29 minutes played came during his lonely start to the season when Kevin McCullar Jr. retired from the Texas Southern game to rest.

Inexperience, injuries and the performance of KU’s starting five, which has been the same in all but one game this season, have all helped KU trust its starters to carry the load so far. But that doesn’t mean the Self wants it or expects it to stay that way.

“I think we need to improve a lot,” Self said Thursday when asked to rate his bench’s game so far.

He then broke down where he believes improvement can come, noting that he probably trusts Yesufu and Pettiford the most of all his bench players at this point.

Pettiford’s role is simple – he’s the back-up for starting point guard Dajuan Harris Jr and if his physique allows him and the injuries stay away, he has the potential to play more than 20 minutes a game, some with Harris stick and some in his place.

“I think Bobby has to be in the game if Juan isn’t,” Self said Thursday, echoing an attitude he’s had throughout the season. “And they can be in the game together.”

The Jayhawks’ other top option as a backfield substitute is five-star rookie MJ Rice, who has also struggled with injuries but has also had to deal with inconsistencies and limited opportunities.

“I think Joe is definitely a spark who can help us off the bench,” Self said Thursday. “MJ isn’t quite that sparky. MJ is more of a goalscorer. If he could tighten up a few things defensively and all, I think he could get extra minutes to become a goalscorer.

This is what Rice was known for in high school and what Self still believes he will become in Kansas. Self said Rice was just “time away from finding his footing.” 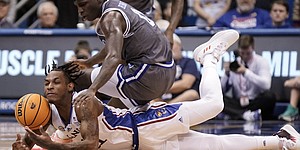 “It’s hard for a goalscorer to be a goalscorer when you’re only playing two or three minutes,” said Self. “So he needs some extended minutes. But he’ll probably do that by being more responsive to what we’re trying to do defensively and paying attention to the ball. … He still can’t show what he can do because we don’t let him show it because we need him to do the other things that are more valuable to our team.”

And then there’s the situation with KU’s Big Man rotation, which has been a weak point in KU’s lineup throughout the season.

Sophomore forward KJ Adams has started every game at 5 for the Jayhawks and has done an admirable job for an undersized center. His strength, athleticism and motor skills have enabled him to survive – and occasionally thrive – while playing off the ball.

Selbst is still hoping that one of KU’s big four men on the bench – Zach Clemence, Zuby Ejiofor, Cam Martin and Ernest Udeh Jr – will soon emerge as a factor.

“I told (ESPN’s Dick) Vitale today we’ve got four pretty good bigs, they’re just not quite there yet,” Self said Thursday. “And I say that especially with (newbies) Zuby and Ernest and Zach because he’s young too. All three of these guys are going to be really good college players. Zach is asked to play a style of play that probably doesn’t suit him best personally, but is best for our team. Zuby and Ernest are only maturity and experience away from being really good. And I think it will happen this year.”

Collectively, this quartet averages just 6 minutes per game, although that includes just one game from Martin, who played just over 2 minutes in KU’s win in Missouri after missing the first nine games of the season with a shoulder injury.

Udeh and Pettiford were fairly routinely the first big and first guards off the bench for the Jayhawks, and Self said he likes the prospects for that team even more if those two could become key elements of the rotation along with Rice.

“We don’t need all three to get through when one of these guys can differentiate and be a guy who can play 15 or 20[minutes]a game,” Self said of Clemence, Ejiofor and Udeh. “If we can pull that off and get MJ to the point where he can do something like that, I think it changes our whole physical appearance because (then) you would take two of our top three or four athletes off the bench. So I’m confident that can happen.”

KU junior Jalen Wilson, who leads the team in both scoring (22.1 points per game) and rebounding (9.4 rebounds per game), said he believes it’s possible.

“I have great faith in her,” Wilson said of KU Bank. “We just have to keep going to finish the guys. When conference games happen you never know what’s going to happen and the lads have to be ready to play. It can’t be, “Oh, I have to win this game (for us).” It can be, “If I win these few games, we can win this game in the end.” I think if we build that mindset now, that will help.”