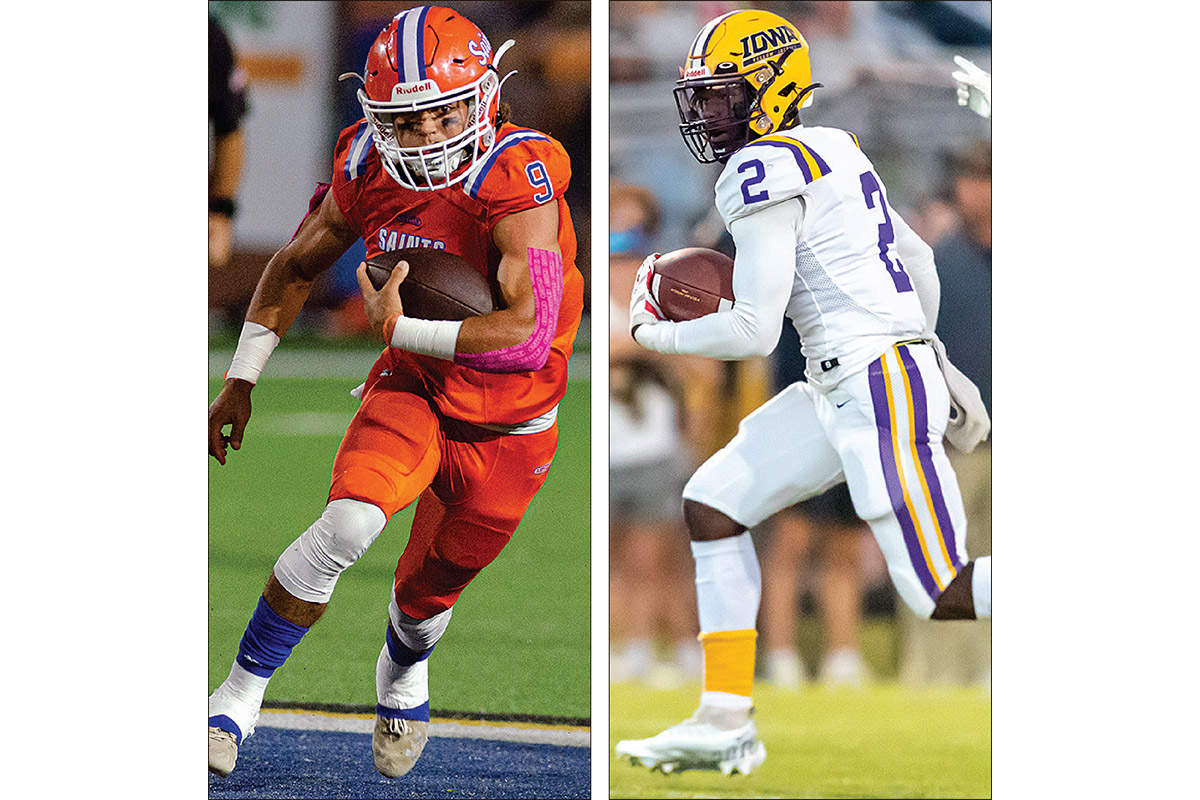 St. Louis quarterback James Reina (left) and Iowa running back Ronald Young will be the focal points of tonight’s game, which will go a long way in deciding the county champion. (American Press)

Iowa can earn the District 3-3A title tonight with a win over St. Louis Catholic, while a win in St. Louis will earn him a share of the crown.

Iowa (7-1, 5-0) is beginning a five-game winning streak in which it has bested its opponents 157-45. Two of the wins were shutouts. Running back Ronald Young (1,114 yards, 8 TDs) drives the Yellow Jackets’ offense.

St. Louis (7-1, 4-0) has also won five straight games and averaged 39 points per game during the series. After giving up 51 points in a Week 3 loss to Vidor (Texas), the Saints have conceded 68 points in their last five games. Quarterback James Reina (757 rushing yards, 1,241 passing yards, 30 total TDs) leads the Saints offense.

“It all starts and ends with Reina,” Johns said. “He can run, he can throw and they have multiple receivers that are good.

“Grant Evans is a deep ball threat and can also walk sideways; He is big and difficult to fall. Brooks Habetz can walk, as can Trey Tate. They rotate several running backs. You will be a burden to quit.

“Defensively they bring back a lot of guys from last year. The two linebackers are very good and the defensemen had several good games against Lake Charles College Prep (a 23-13 Saints win in Week 7). Obviously their kicking game is second nature. They are solid.”

Johns said adaptability has been key to his team’s success.

“The biggest thing for us was knowing that we have to win games in different ways,” he said. “We lost two receivers before the season. Against Prep (a 17-16 win in Iowa last week) we weren’t as strong and they were more athletic. We had to change a few things to keep up.”

“Ronald Young is a great running back,” he said. “Their offensive line is very good and I have a lot of respect for their coaching staff. They’ve been known to roll their defense under Coach Johns and they’re playing really well at the moment.”

Matherne said his team has been playing well at all stages lately.

“The most important thing for us is the football operation and that’s what we’ve been doing all year,” he said. “We’re starting to find a groove in the passing game, which I’ve been happy with and I’m very happy with the way the defense played.”

With points likely to be a premium, Matherne said ball security will be key.

“Takeaways are the biggest thing – can we take the ball away and can we protect it?” he said. “I think the team that turns the ball over the least will win the game.

“Special teams will be important. We attach great importance to this. We want to win this fight. They are good on special teams and we think we are too. Sticking with football on offense and not giving them extra opportunities and that we capitalize on things in special teams is going to be big.