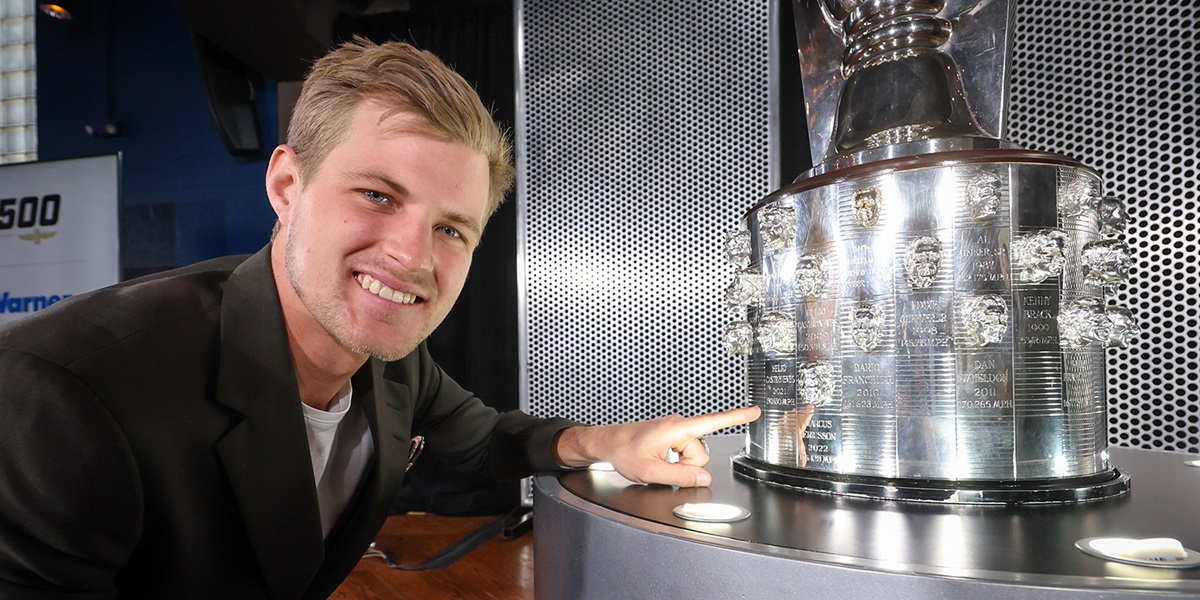 Marcus Ericsson unveiled his image at the Borg-Warner Trophy on October 27 in Indianapolis, one of the most significant honors since winning the 106th Indianapolis 500 presented by Gainbridge on May 29 at Indianapolis Motor Speedway.

The Ericsson sterling silver bas-relief image is the 109th face featured on the iconic trophy awarded annually to the winner of the Indianapolis 500 since 1936.

Ericsson, a native of Kumla, Sweden, earned his first win in The Greatest Spectacle in Racing in the #8 Huski Chocolate Chip Ganassi Racing Honda and is the second Swede to win the race, after Kenny Brack in 1999, for the fifth Indy 500 win for Chip Ganassi Racing as the only participant and the sixth overall victory.

Renowned sculptor Will Behrends created Ericsson’s image, as he has done for every winner since 1990. The unveiling ceremony took place at the Union 50 in downtown Indianapolis.

“I’m truly honored to have my face carved on the historic Borg-Warner Trophy as a winner of the Indianapolis 500,” said Ericsson. “It was an incredible experience working with Will Behrends and seeing his dedication and artistry firsthand. Will did a wonderful job. Today is a very special day for me and everyone at Chip Ganassi Racing. Joining all previous winners at the trophy is something I will always be very proud of and will never forget.”

Behrends begins his creative process by studying a series of 360 degree photos of the winner to provide a basis for sculpting. Winners will then be invited to an in-person session where Behrends will construct a scale clay model of the driver’s face at his studio in Tryon, North Carolina.

This life-size clay version serves as a reference for Behrends to construct the smaller model, a piece made from an oil-based clay mixture. The smaller clay model is turned into a mold and cast in wax before being sent to a jeweler to be turned into sterling silver. Behrends completes his process by polishing and polishing the sculpture before attaching it to the trophy.

“Marcus is a great champion of the ‘500’ who truly understands and appreciates the many traditions of ‘racing’s greatest spectacle,’ such as today’s memorable ceremony,” said IMS President J. Douglas Boles. “We look forward to continuing to celebrate his victory until then, until we see him on track next May at the 107th edition of this legendary race.”

Originally designed in 1935, the sterling silver trophy measures over 5 feet, 4-3/4 inches tall and weighs over 110 pounds as it bears the sculpted face of every winner since 1911. After the unveiling in Indianapolis, the trophy will travel to Ericsson’s native Sweden to celebrate his victory on the track.

Early next year, Ericsson will receive its BorgWarner Championships Driver’s Trophy, also known as the Baby Borg, a miniature replica of the large Borg-Warner Trophy.

“The Borg-Warner Trophy is much more than just a race win; It symbolizes the great heritage of the Indy 500 and honors the driver for his triumph while paying tribute to the champions of the past,” said Michelle Collins, global director, marketing and public relations at BorgWarner. “We are honored to add Marcus’ image to the trophy and together as a company, congratulate him on his countless hours of work and dedication to his craft.”

The 107th Indianapolis 500, presented by Gainbridge, is scheduled for Sunday, May 28th. Visit IMS.com for tickets and event information.