REXBURG – Veterans Day has something special. It is a time to honor those in our community who have risked their own lives to serve in the military – those who are still with us and those who are no longer with us.

On Friday morning, the gym at Madison High School in Rexburg was filled with veterans, their families, students and other community members who rejoiced in the decades-old tradition of gathering to honor those who have served in the U.S. Armed Forces.

Retired US Air Force Lt. Col. Robert L. Jones served in the Vietnam and Korean Wars and Desert Storm. He talked about acknowledging the price of freedom and the importance of understanding the value of that won freedom.

“Every member who has served in our nation’s armed forces has written a personal check payable to the US government for an amount up to and including his life,” Jones said. “This is the obligation that has placed them in jeopardy on foreign soil, to meet and defeat the enemies of democracy on the battlefield… These brave patriots found meaning in something greater than themselves. As guardians of our freedom and liberty, they embodied the spirit of service. Their selfless sacrifice defines everything that is good about our nation.”

Jones said it’s not enough just to talk about freedom.

“Freedom has never been free,” he said. “And sometimes it comes at a very high cost. The freedoms we enjoy today are the ones our brave ancestors fought for and often died to acquire and preserve. The legacy of our generation cannot be less.”

Joseph Law of Teton City was one of the veterans honored at Friday’s ceremony. Law is a veteran of the US Air Force, where he served as a longtime reservist. He got emotional while describing the admiration he had for his own heroes – his uncles Orland Roberts, Mike Brinkerhoff and Wood Jenkins.

“Find out who your heroes are,” he said. “Sometimes they pull back the curtain and let you know what they’ve been through, but at least they know you care.”

Willis Kortright from Rexburg came from a military family. Both parents served, and Kortright himself was in the Army National Guard in the late ’60s and served in the Vietnam War. After serving in the National Guard, he enlisted in the US Army until 1980. He appreciated the time the students and others spent preparing and running the program.

“It’s a way to honor those of us who are no longer here and to honor my family,” Kortright said. “I hope it gives (the students) a sense of pride in their country.”

Idaho State Representative Jon Weber attended the program and expressed his appreciation for the veterans in the community and for those who came together to honor those veterans.

“It’s always a privilege to honor our veterans,” Weber said. “To bring these generations together, to help them understand and honor one another.”

Weber noted the high caliber talent of those who prepared the music for the program.

“The arts in Madison — not only are they among the best in our state, they’re among the best in the country,” he said. “It’s truly a reflection of our families, our communities, and the dedication of their directors.”

Bel Cantos Director David Hinck said the traditional Veterans Day ceremony is always special to him and his students.

“I don’t think we can overstate the importance of military service,” Hinck said. “It’s easy for us to sit back and not realize how blessed we are.”

“They planted the acorns and we’re sitting under the oaks,” Busby said. 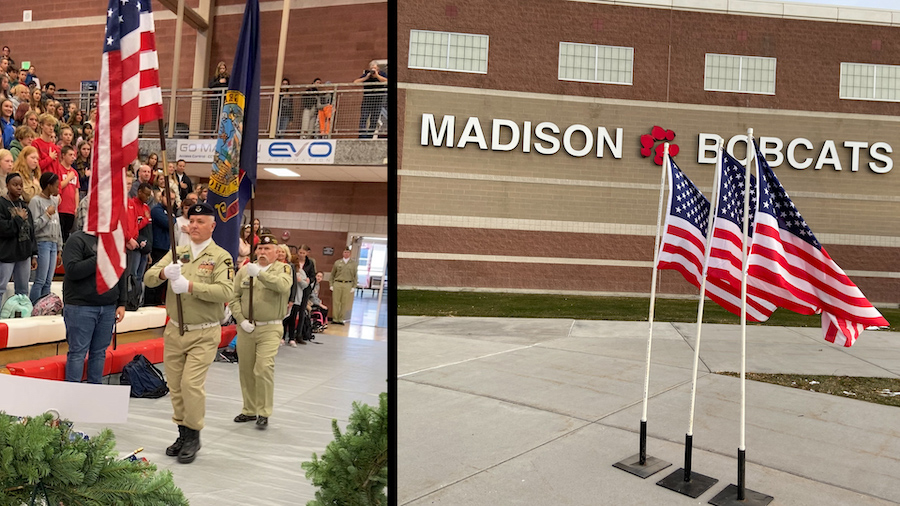