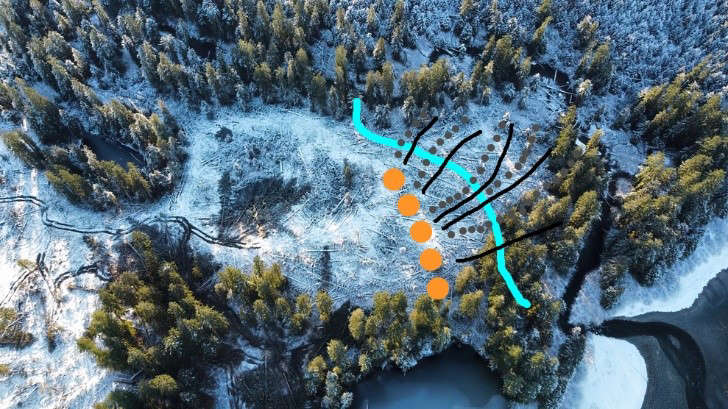 JUNEAU, Alaska (KINY) – The Sealaska Heritage Institute (SHI), the Sealaska Corporation and the Yakutat Tlingit Tribe are calling on the Yakutat Native Village Corporation to halt logging of an area that is a known and important cultural and historical site until an assessment can be carried out and mitigation plans drawn up.

The area in Yakutat Bay known as Humpback Creek (Kwáashk’ Héni) is the ancient home of the Kwaashk’iḵwáan clan and where they obtained the humped salmon crest. The area is so significant that it is remembered with clan names, crests, history and identity. Literally translated, “Kwaashk’iḵwáan” means “People of the Buckelbach”.

This month, the tribe learned that Yakutat’s village company, Yak-tat Kwaan, was logging the land through its wholly-owned subsidiary, Yak Timber. While logging, a machine operator discovered an archaeological site near Humpback Creek that reportedly consisted of several dwelling pits and a series of parallel stone walls laid across a dry creek bed.

Oral histories tell of Humpback Creek, but no physical evidence of the site has yet been discovered. Frederica de Laguna, an American ethnologist, anthropologist, and archaeologist who studied Aboriginal culture extensively in Yakutat, reported local knowledge of a former settlement at that site inhabited by the Hmyedi, an Eyak clan, but found no physical traces of it. Because of its known historical importance, the reported village and surrounding land were claimed by the Sealaska Corporation under the Alaska Native Claims Settlement Act, but the claim was denied due to a lack of supporting archaeological evidence, said archaeologist Aron L. Crowell of the Arctic Studies Center, Smithsonian Institution.

“As I listened, I imagined what my people’s village looked like. That’s why I know there was a village there because a long time ago my people came from this place and the village raised so much salmon, berries and medicines. So being able to assess this area and this newly discovered stone wall is just a glimpse of what’s out there,” said Lekanof-Baker, director of land and cultural resources in the Yakutat Sacred Sites Administration Tlingit tribe works.

“It’s like a gift from our ancestors, reminding us they’re still here,” she said.

“As a village site, it is very likely to contain ancestral human remains as well as shamanic burials on the outskirts of the village site. Tlingit belief systems hold that we have a duality of spirits – one part that remains with human remains even after death, while the other passes into the spirit world,” Worl said, noting that when Sealaska founded SHI, the institute tasked with protecting local historical and sacred sites.
“SHI takes this responsibility very seriously,” she said.

Since the beginning of its 50-year history, Sealaska Corporation has endeavored to document and maintain the sacred sites of Tlingit, Haida and Tsimshian. The original Sealaska board requested extensive research to document these sites, and its research included interviewing elders and traditional scholars in all communities about sites known to them.

“We have prioritized reaching as many sacred sites as possible within our own land selections and we have partnered with our tribes and SHI to ensure these sites are protected. Our own forest practices require 300-foot buffers around all known sacred sites, and if we find any undocumented sites, we stop work and immediately survey the area,” said Anthony Mallot, President and CEO of Sealaska.

“Although Sealaska does not own all of the sacred sites we have identified, we have again joined forces with SHI, village societies and our local tribes to protect all known sites, regardless of who owns the land – the forest service, the state, or others. We look forward to the value of the cultural and scientific information that will result from studying this particular sacred site because of the depth of oral history related to this site,” said Mallott.

The Humpback Cove Village site is possibly one of the most important cultural resources in Yakutat Bay, with strong ties to clan histories told in oral tradition, Crowell said.

“A remarkable array of cultural features associated with the salmon harvest appear to have survived and the cultural strata at the site may provide a unique record of traditional ways of life and livelihood practices dating back 700 years. Although some of the site has been cleared, the cultural features do not appear to have been significantly damaged and their future preservation should be a high priority,” said Crowell, who authored a summary of traditional knowledge and a preliminary interpretation of the site week after SHI asked him for help.