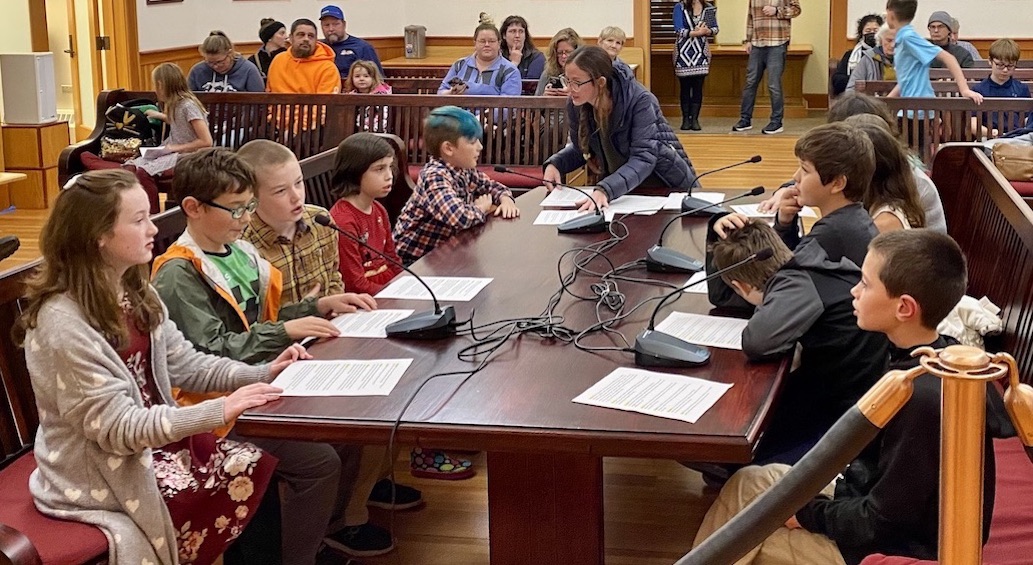 Skagway fourth year Danielle McManus helps the fourth and fifth years pitch to the congregation to plant rain gardens to filter chemicals before they enter groundwater.

Skagway’s school kids try to clean up the community. During the most recent district assembly session, the middle school’s robotics team and the fourth and fifth graders made proposals to the assembly to treat water before it enters the drainage system and to convert the city’s bus fleet to electric. KHNS’ Mike Swasey reports.

The fourth and fifth years arrived well before the meeting was due to begin, crowding the press table outside Skagway’s meeting room. After initial parliamentary negotiations, the group approached the assembly to save the city’s coho salmon population by planting and expanding rain gardens near storm sewers.

“Did you know that when rainwater lands on impervious spots like rooftops, streets, alleys, parking lots and sidewalks, it carries these contaminated particles into our drains,” asked Fable Wallace.

The children took a trip with the Skagway Traditional Council environmental coordinator to see a rain garden that has already been planted.

“Rain gardens are described as depressions, usually between a gutter and a pavement, that are dug out and then filled with large rocks held in place with small rocks. After you place the rocks in the depression, put cloth on top of the rocks and then fill them up with soil,” Aleeyah Topasna said.

Typically grass is planted on the ground, but other types of vegetation can also be used. The contaminated water can flow through the rain gardens, filtering out chemicals that could prove hazardous to salmon habitats.

“Don’t you think we need more rain gardens? Let’s act quickly, Members of the Assembly,” said Finnley Verhaeghe. The rest of the table joined her to shout “And save our salmon!”

There was a brief pause as the middle school’s robotics team took a seat at the press table to deliver their pitch to bring the port and city bus fleet into the modern age of electrification.

The team had completed a research project during which they learned that converting the city’s SmartBUS fleet to electric motors could help reduce air pollution in the city. Most of Skagway’s energy comes from hydroelectric power, which is distributed by local utility Alaska Power and Telephone. They even had a proposal for funding the venture.

“Our proposal for funding an electric bus initiative is to charge an additional dollar per person per trip on the SmartBuses next summer, seek green energy grants, and ask cruise lines for donations for this startup infrastructure,” Sam said munson . “Today we ask you to join our green initiative and include in your upcoming budget a feasibility study for the smart bus migration to our electric bus fleet,” said Luca Tronrud.

The assembly has a memorandum of understanding with Yukon Energy to study how to bring renewable energy from Canada’s Yukon Territory to Skagway during the summer months and allow cruise ships to plug into a green energy source while docked in the city. This project is still in the concept phase.

Members of the Skagway Assembly and city staff are working with both student groups to begin exploring these initiatives.