First in a series of five honoring NKyTribune’s NewsMakers of the Year. Tomorrow: Judi Gerding.

By Kate Wiseman
Specially for NKyTribune

Chris Carle is one of those people who will ask what you need and get it done — whether it’s organizing a fundraiser, building a high school football program, or overseeing hospital mergers and acquisitions. He is a servant leader in every sense of the word, whose dedication to improving our region has touched the lives of many. 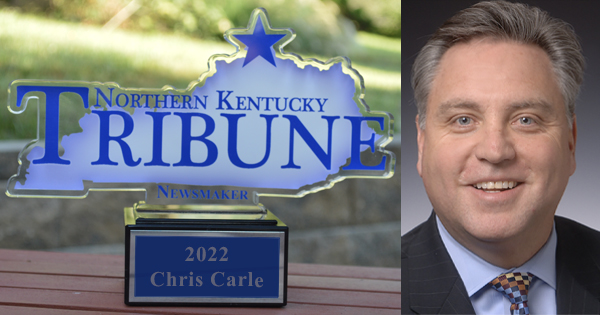 Carle’s experience in healthcare dates back to his youth when the Moeller High School student began working in the hospitality department at Bethesda North Hospital in Montgomery. Over the next nine years, he served in a variety of roles—from registered nurse to medical device specialist to managing director of critical care services—while earning bachelor’s and master’s degrees in healthcare administration and planning from the University of Cincinnati.

At the age of 26, he was recruited by a group of doctors and pharmacists to help save a rural Kentucky hospital that was about to close. Carle took the job and together they breathed new life into Grant County Hospital. It was the first of many positions that would shape his leadership for the next 30+ years.

When capital was needed for equipment and upgrades, Carle found a partner in St. Elizabeth. The hospital switched to the St. Elizabeth system, ushering in a new era of advanced local medical care for the community.

“It’s been great for St. Elizabeth, the hospital and the people of Grant County,” recalls Carle, who stayed on as Administrator after the takeover while taking on new system-wide responsibilities like recruiting physicians and adding St. Elizabeth Florence to his Supervision in 2008.

Since then, Carle has held many responsibilities at St. Elizabeth where he led physician relations, business health, business development and systems operations. He is currently President and CEO of the St. Elizabeth Provider Network and Chief Operating Officer of St. Elizabeth Dearborn – another successful venture and community asset. 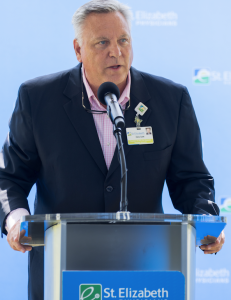 “Chris has been absolutely fantastic for St. Elizabeth Dearborn,” said Sarah Siegrist, Director of Development and Foundation Operations at St. Elizabeth, who led development for the Lawrenceburg Hospital prior to the transition.

“To know what kind of leader he is, you only have to see him sitting in the cafeteria over lunch, interacting with colleagues. He asks about their day, their workloads, their families, if their department has needs. He thanks the staff who serve the meals and commends the great work of those who make the facility shine.

“Chris’ leadership is one of the main reasons the transition has been so smooth and successful. His conscious transparency in all matters, his open-door policy, and his interest in developing and celebrating the leaders around him have inspired St. Elizabeth Dearborn to reach new heights in healthcare.”

With Carle at the helm, the Dearborn campus has invested heavily in quality improvements, equipment, facility and technology upgrades, and its staff. And now they’re beginning their most significant investment yet by embarking on a $250 million construction campaign to build a modern cancer center, a medical office building and eventually a new hospital.

“I’ve been very fortunate because I’ve been on the growth side of things in every situation I’ve been involved in,” explains Carle.

And not just in his professional life.

Carle has been making things happen in the community for decades. From working with teachers to set up Grant County High School’s football program — and coaching for 12 years — to helping launch the most successful fundraiser year after year for Diocesan Catholic Children’s Home (DCCH), Carle sees a need and brings the people together and resources to fulfill it. 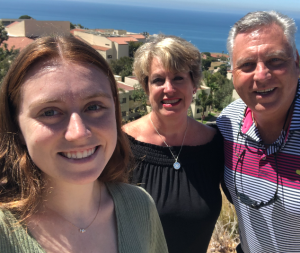 “It was remarkable to watch Chris in action, bringing passion and commitment to the community,” said Bob Hoffer, Managing Partner at DBL Law, who served on the DCCH Board with Carle. “He’s a great leader and one of the best people I know.”

“Growing up professionally in St. Elizabeth gave me an incredible aptitude for community service, human relationships and running a good organization,” says Carle. “I try to share that with every organization that I belong to.”

As for his personal life, it’s no surprise that it was in St. Elizabeth that Carle met his wife Toni, a registered nurse who recently retired after 41 years in women’s ministry. The two live in Park Hills and have a daughter, Kirsten, who is studying at the University of Cincinnati and works part-time as a pharmacist and plans to attend pharmacy school in the future.

And while it’s certainly been a common thread that has woven through their entire lives, it’s the time he spends together as a family, in the great outdoors or at Lake Cumberland that recharges him and brings him the most joy. 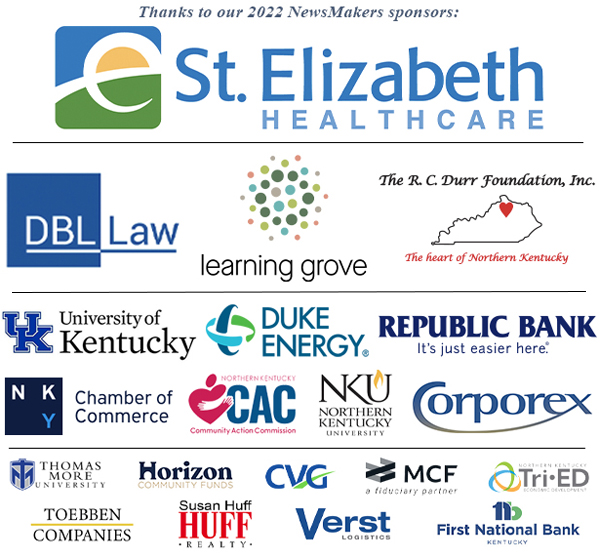 Get NewsMatch Match – Help the NKyTribune continue to serve

Help maintain a professional, accurate, and timely local news and information service you can rely on. The NKyTribune is a not-for-profit publication dedicated to serving the Northern Kentucky region and offering FREE access to everyone. Your contributions matter – and are offset by national ones NewsMatch Funders by December 31st. We need and appreciate your support. Send your checks to NKyTribune, 644 Braddock Court, Edgewood, Ky. 41017 or